Filmmaker of some renown, Gil Alkabetz has wowed the animation world on several occasions, notably with his riotously hilarious « Rubikon », winner of the Funniest Film Award at Annecy, and more recently with « Der Da Vinci Timecode », an incomparable experience that redefines the perception of classical art by subjecting it to the specificity of film language. Earlier this month, the animation director was in Brussels for the Anima Festival, as part of the jury for the International Competition, and took time out between screenings to talk to Format Court about the ever-evolving universe of animation and how some people never learn from their experiences. 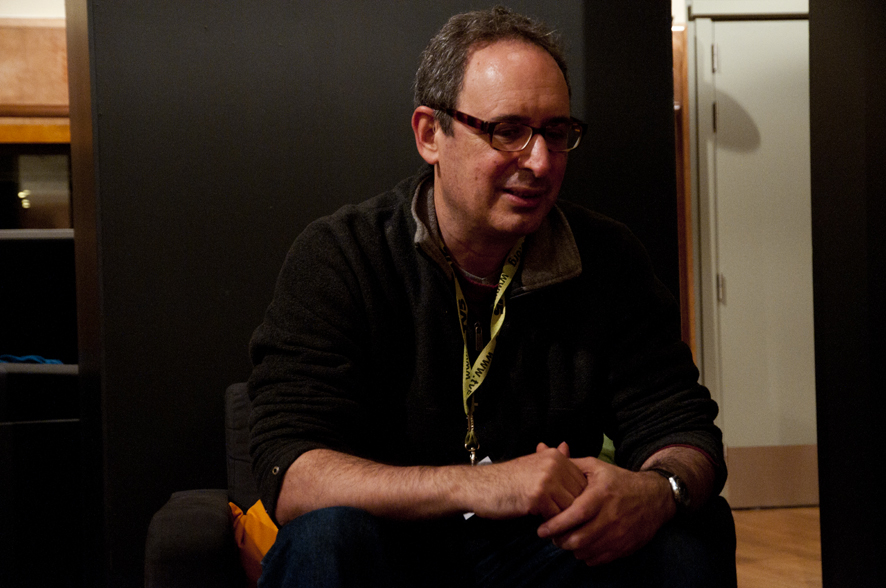 Growing up as you did in a kibbutz, what first drew you to cinema and particularly to animation ?

My childhood was quite some time ago! My first exposure to cinema was through our neighbour’s 8mm project. We used to watch cartoons like « Bugs Bunny », « Disney », etc. That was all I knew of animation back then, but I was already fascinated by this genre more than any other. So I always knew I wanted to study animation, and when I was about 19 I saw for the first time films from the National Film Board and Zagreb Film, which was a whole other world than cartoons. This motivated me to go into to the Bezalel Academy of Arts and Design. At the time, they had no real animation department. There was a very good chance of making animation films but through other sections. I studied Graphic Design and Illustration. Today it’s very different. There is a special animation department and a four-year degree course.

Now that you’re based in Germany, do you still follow the animation scene in Israel ?

I do sometimes. For instance, last year I did a workshop in a school in the south of Israel. I’ve noticed that in Israel, like in the rest of the world, with new possibilities and technologies like the advent of the Internet, people get into animation very early and already have a lot of knowledge in the field. Young people around 20 know a lot about animation techniques and visual language, things which I didn’t know at their age. But the animation scene in Israel is quite polarised. There’s very little state support, though things are changing slightly since « Waltz with Bashir ». On the other hand, there are many students graduating every year. But most of them can’t go ahead after that. So they get into the industry and make commercials. It’s still not easy to make non-commercial animation films there. 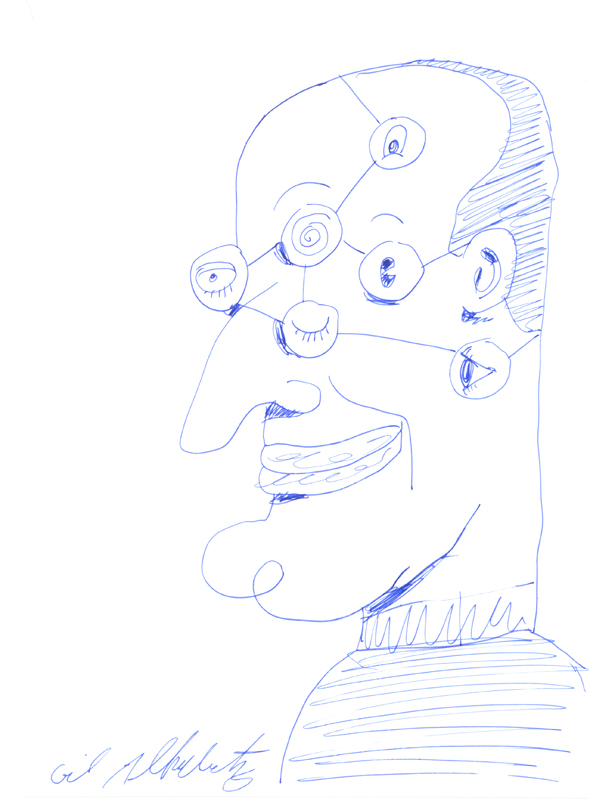 Already in your first film « Bitzbutz », there are stylistic elements that we find in your later works: monochromatism, organic movements, limited or no verbal narration and use of music to narrate. Did you have these things in mind when you made « Bitzbutz » ?

No, not at all. « Bitzbutz » was my graduation film at the Bezalel. This just happened to be the kind of film I made and then it led to other styles. Maybe if I had made another kind of film it would have taken me in another direction. The reasons I made « Bitzbutz »the way I did was primarily due to economic and time constraints. Since it worked, and was well received in school, I developed this style I guess.

What brought you to Germany and to the Film Bilder studios ?

I initially worked for a short while in the late 80s in an animation studio in Israel. They weren’t very common then, as there was virtually no market for animation. But with that professional experience I was invited by the Stuttgart Art Academy to make « Swamp ». Stuttgart is really a cultural centre for short animations. So I initially came to Germany for studies. But I already had a few connections with Film Bilder, which also started off in Stuttgart and so I eventually made some films with them.

« Rubicon », arguably your best received film, won the Funniest Film Award at Annecy, which is quite en achievement. Where did the idea come from ?

For « Rubicon », prior to finalizing the script, I had written about 5 other scripts, some more serious and even a horror story. And this particular storyboard got the best reaction. So I decided to go ahead with it. I was not sure how it would turn out. But it all seemed to work when I decided to give up the idea of a narrative and all relationships between characters, etc. I wish I knew where my ideas come from, but I have no clue. Every film comes from nothing and my experience doesn’t help me either. When I make a film, I can’t say I learned something for the next one. It’s like I always have to restart from zero. I feel every film I make is the first and the last one. I never believe I can make another.

Do you still think so?

Yes, even more so with time! I never know what to do next. And then suddenly it comes to me, but I haven’t really worked out a system. I usually let time decide. Once in a while I have an idea, and when I have an idea that stays in my head for a long time I think maybe this could make a film. But the sources are very different, they come from all over. Very often they’re old ideas that I once had and couldn’t do anything with, but then years later I think I can turn them into films.

How did you come about creating Sweet Home Studios?

I created Sweet Home Studios with my wife, partly because of the new technological possibilities in the last few years. Not so long ago, though it seems prehistoric now, to make animation you needed to work in a studio with very expensive equipment, costing up to hundreds of thousands of Euros, you needed optical equipment and editing tables, etc. It couldn’t be done alone. But then when computers came in, everything changed and you could work at home. Today all the programs are available and you can work a lot faster. There’s less reason to be tied to the studio. So we thought we’d make the studio at home. This has its flip-side though; you have less feedback and lack the dynamic of working in a big team.

« Der Da Vinci Timecode » is completely different to your other animation films. How did the notion of animating a known work of art come to you?

This was one of the concepts that I did develop. I made a film called « Travel to China », where I wanted to use only one image for the whole film. I drew the image myself and used the same principle as in « Der Da Vinci Timecode », placing the camera on different parts of the same picture. But the problem was, once the movement began the audience forgot that is was one single picture and tended to relate to it as a film. To solve this problem, I thought that if I took a known picture, no one would think it was a film but they’d know it was one single picture. That was my motivation for « Der Da Vinci Timecode ». In a sense it’s a very strict limitation to use only one image, and maybe a little artificial. But when you decide : that’s my limitation and I won’t add any animation or effects, you become more creative somehow. You discover things you wouldn’t have suspected. I like this reduced minimal idea.

When you’re not making films, you’re busy teaching. How do you marry being an artist and a teacher ?

It isn’t easy. Teaching is interesting but it activates quite another part of the brain. You become a critic. Students come with ideas they’ve already thought about. So they’ve already done the hard work of coming up with a concept, which you see as a ready thing and relate to. It’s a dangerous position for an artist because you get into this way of reacting and it sometimes comes at the expense of thinking and inventing for yourself. On the other hand, it’s very interesting, that’s the danger. You can see someone’s idea and see the potential and discuss about it. As a teacher I don’t focus much on the technical aspect as I’m not that good at it. My students are much better in fact! So I work on the concept. How they tell a story with pictures. Many students are very talented with technical skills and a strong visual sense but the concept and idea can be very difficult to express. Nobody helps them with the idea, most professors say : “Come up with an idea and see me”. So there is a big demand for help in this area. 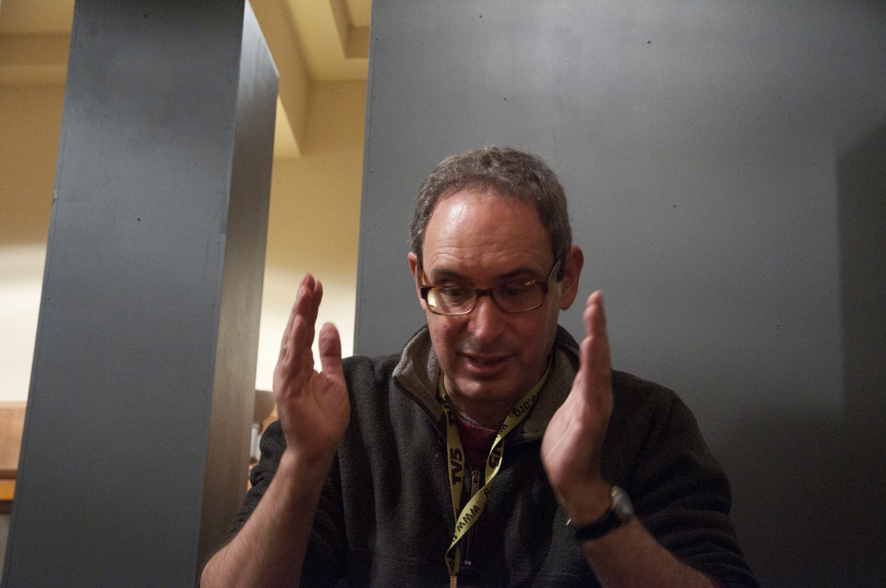 Have you ever considered making a feature length animation or passing on to live action ?

Live action is not at all my thing. There are many different kinds of animators but many of them, and I belong to this category, are like children making films. I don’t mean children’s films though. Live action tends to deal with adult subjects and relations with people. I don’t feel I could deal with actors and such situations. But animation in a feature-length format is something I often think about. I’d love to make a structural story that’s not just based on a small situation. I’m thinking of something totally different from the short format. It would be a great challenge for me and something I’d love to try sometime. It’s interesting for me to see if I can hold people’s attention for such a long time.